How to Build Your PDX Breakfast Cred

Let’s say you were on a mission to uncover the best places in Portland for breakfast. Would you a) Google it; b) head to The Pearl; or c) hire a brunch sherpa? While Google may result in an array of choices and The Pearl may suffice, the correct answer is C. Why? Because hiring a brunch sherpa […]
Read More

For the uninitiated, Chez Clark is the fancy name for my little kitchen where occasional magic occurs. Mayhem is even more likely, especially when scaling up to feed hungry hordes – e.g. Bacon Takedown! I’ve tried to organize by main meat ingredient and I’ve started a veggie section at the end. As with my List of Portland (+ Other Cities) Hashcapades, there are older posts with a little less polish, for which I humbly beg your forgiveness.

I have additional recipes for dozens more. Please let me know if you’re interested!

The Big Easy Hashcapade from Emeril

Chicken – These are fancy!

Fish – Use smoked trout too!

Pork – Bacon is the gateway meat! 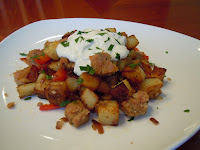 Shellfish – Crab and Clams, others coming!

Welcome! Sign up here for hashcapades newsletter where you'll discover the latest and greatest hashcapades in Portland, new hash recipes and more!